Many nations and tribes across the world have not forgotten the face of their fathers, reclaiming sovereignty and independence, discovering and exposing the state and its government for what it is, a foreign jurisdiction corporation. Some have been working on this feverishly for many years, having achieved some separation and recognition. Others are still in progress, whether previously surrendered like most of the ca. 560 tribes of America or not, whether treaties were signed and later disregarded, does not matter, since pretty much all governments are guilty of treason or act in complicity, no longer honouring any historical agreements, bills or charters.

The sovereign people of Hawaii, whose territory in fact was unlawfully annexed, confirmed by US president Clinton some decades ago, have negotiated to populate their own government, parallel to the US government. Considering the strategic importance of its location and military apparatus on the various islands, probably a notable compromise. If the people were to push for a complete secession, it would possibly end up in a bloody civil war.

Other nations pushing the envelope of freedom are :

Most remarkable and thorough approach, driven by chief Usti and his people, seeking recognition amongst each other and from other peoples around the world. The danger they pose to the system became very evident when they tried to set up their own bank. A bank not only for standard banking transactions according to this SEC entry.

Or listen to the confusion at the board of assessors meeting, when discussing and rejecting, in the absence of any Southern Cherokee People, property tax exemption with regards to land donated to the people, then at a second meeting inviting Chief Usti into the circle :

The Aboriginal Provisional Government, “established on the principle that Aborigines are a sovereign people,” while not a micro-nation, issues (Ab)original passports and birth certificates, with Libya, Norway and Switzerland having accepted the documents, and the Australian government reluctantly allowing activists to re-enter using them.

The above is an excerpt from this article. Read more about Murrumu here, or listen to Peter Fisher of the Yidindji tribe :

Historically the peoples of the six nations, although originally five, custodians of the north eastern region of what was to become America. Their confederacy strong over centuries and present at the dawn of modern USA. Issuing their own passports back in the 1920’s, successfully travelling abroad, although this came to an end or got suppressed by the corporate government, when the need to collateralize its registered citizens arose, due to the banking cartel’s orchestrated bankruptcy. Recently this customary right was rediscovered and exercised when a small delegation of sportsmen and women travelled to the UK for a tournament.

The Squamish nation have been at the forefront engaging with the de facto quasi Canadian government for many years. Most prominently presented by chief Kiapilanoq and  Irene-Maus Gravenhorst, establishing their own de jure government, serving notices on foreign government institutions operating unlawfully on Squamish soil.

Terrania was an alternative society offering travel documents other than corporate government ID and passports. A place where a living wo/man could record his or her private property outside the state registration system. A modern tribe or nation, exploring pathways to navigate out of the forever more restraining, restricting and confining prison matrix. Established in 2011, shortly after and unbeknowst to the Republic of Good Hope, the South African equivalent, perhaps an early case of synchronicity, people seeking freedom from statist slavery in different parts of the world at the same time.

Without explanation Terrania, its website and most online references, bar some mindless citizens’ commentary, disappeared sometime after 2016, but the Internet Archive “Way Back Machine” captured and saved the basic Terrania website. Unfortunately google translate fails to translate the archived website in its entirety, but segments of text can obviously still be placed into it. 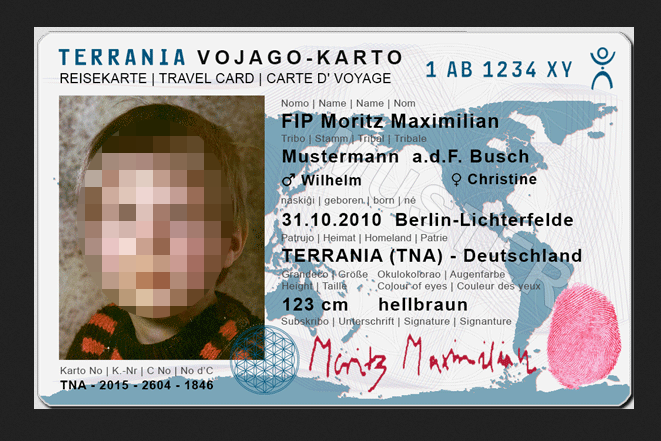 What Terrania started but was unable to manifest, Königreich Deutschland took to the next level. They are undoubtedly leading the independent sovereign nation front in the world, despite their location in Germany, a place far more legislated, limited and restricted than countries in Africa or Asia. Especially the covidian situation seemed to have boosted their motivation and publication. They now have a bank, an alternative currency, their own ID documents and number plates, a pension provision, health care and co-op style outlets in various parts inside the Germanic territories.

KRD does not seem to be influenced by other freedom seeking movements, the majority already compromised and infiltrated. They decided for the kingdom route, declaring Peter Fitzek a monarch following a coronation ceremony :

In recent months, KRD received some attention from the mainstream media :

So much that the provincial intelligence agency picked up on a private number plate in the above video, to warrant a visit by investigating officers :

Most of their work, documents and videos are in German, but Google and  Youtube’s AI auto-translate and captions provide adequate interpretation these days.

What is remarkable about Peter and KRD, they are not after any alleged or imaginary grand sum of FIAT currency inside the strawman accounts, nor do they seek to topple the current regime or become the saviour of a nation, all they are doing is getting on with their own lives, advocating a peaceful and lawful as possible departure from the statist system, which was never designed to serve living people in the first place.

Furthermore KRD is utilizing certain sections within the BRD law book (BGB) making provision for what they are doing. Here are the preamble and the very last article 146 :

Conscious of their responsibility before God and man, Inspired by the determination to promote world peace as an equal partner in a united Europe, the German people, in the exercise of their constituent power, have adopted this Basic Law. Germans in the Länder of Baden-Württemberg, Bavaria, Ber­lin, Brandenburg, Bremen, Hamburg, Hesse, Lower Saxony, Mecklenburg-Western Pomerania, North Rhine-Westphalia, Rhineland-Palatinate, Saarland, Saxony, Saxony-Anhalt, Schleswig-Holstein and Thuringia have achieved the unity and freedom of Germany in free self-determination. This Basic Law thus applies to the entire German people.

No-one seems to question how, where and when the German people adopted this basic law, did every man and woman consent to it, contractually or make a binding oath, or what exactly is basic ? This was obviously done in post WWII times, when most people couldn’t care less about politics, government or laws, they were busy rebuilding a nation and focused on emerging consumerism. We now know that basic, in terms of an initial charter or set of rules, means it only works in conjunction with a plethora of incomprehensible and forever convoluted legislation and 1000’s of acts, by-laws and regulations, thus factually rendering it useless for any layman asserting the original content, subsequently he finds himself at the mercy of attorneys, lawyers and judges, who have sworn an oath to the private BAR legal society and sold their souls to the devil.

What is even more outrageous, the last sentence “This Basic Law thus applies to the entire German people.” It is simply assumed and quasi confirmed that all German people collectively and privately agreed to the above, based on some perceived unity and act of self-determination, or a blanket is cast making everyone subject to the law (book).

Paradoxically article 146, after wading through pages of legalese, neutralizes the imposed blanket or facilitates another option :

This Basic Law, which applies to the entire German people after the unity and freedom of Germany have been achieved, loses its validity on the day on which a constitution which has been freely decided by the German people comes into force.

Firstly it implies or suggests that the basic law the basic law book itself just presented in its preceding 145 articles was not freely decided upon, confirmed by the preamble, and all it takes to undo its magic, validity or force, is for the people to declare or publish a constitution they willingly and conscientiously accept and consent to. This is exactly what Königreich Deutschland did and why it will be very difficult for the statist legal system to stop them.

Just a few words on UNPO, what seemed like another great idea or initiative back in the 80’s, highlighting discriminated and persecuted nations, probably also got usurped and infiltrated in no time, for there is a real danger to the status quo if and when people discover or recall their freedoms and inalienable rights.

Reading about UNPO on their website and on wikipedia, they tick all the right boxes, similar to the original UN charter or the Declaration on the Rights of Indigenous Peoples, telling us exactly what we want to hear, as in not to worry, this issue is taken care of, we got this covered. The truth couldn’t be further from the facts, because too much is at stake, to grant any nation complete sovereignty. This is merely another controlled opposition. Again, one of the best examples are the Southern Cherokee Nation and Red Fire People when setting up their own bank.

Further and more questionable, regarding UNPO’s objective, in 2015 the District of Colombia or Washington DC was admitted as a member, which for anyone who has done their research on who and what DC is, should be the final nail in the proverbial coffin for UNPO. Apparently the decision to accept DC was based on discriminatory voting rights of the residents in Washington DC.

Still, we see or hear about nations and people(s) seeking to become members of UNPO and/or obtain so-called ‘observer status’, as well as approaching the UN and its many forums, all claiming to assist native nations in their plight, but effectively only there to register and control any of the last remaining free people on earth, the ongoing effort to codify and eliminate anything customary.