While this website assists in the process of establishing sovereign micro-nations (territorial) by way of land repatriation and cancellation of land registration, doing so for yourself (non territorial) is just as important. We need to walk away from the imposed system of slavery and bondage altogether, privately and collectively, free ourselves and the land. While it’s all fun to declare new nations or territories, draft bills, constitutions or charters, design flags and uniforms, for as long as we still use the old parent state’s documents and tags, i.e. ID, passport, driver licence, birth certificate, we are not sovereign, independent or free from it. Always keep in mind why we are doing this, if you are ready to leave one corporate, deceptive, unjust and usurped district or country, based on your investigation and research, you wouldn’t want to keep identifying with it or be associated with it. There is no middle way or compromise here, it’s either in or out.

There are obviously many slightly different approaches, most of them still in trial & error, evidently due to the reluctance of the system to let its subjects aka human collateral go. The continued non response to any such demands only confirming a level of complicity or admission of guilt. It is about revoking all (fraudulent) contracts with any state completely or at the very least informing its agents appropriately about it, subsequently achieving status correction, become a people with standing, in your own private unlimited capacity, in truth and with honour. Garry Davis was the first man to initiate such process when he established World Service Authority in 1954. It wasn’t easy, got him into trouble and arrested on a few occasions, but he was the first registered citizen to voluntarily become stateless and unregistered world citizen. See the links section for other people’s website and ideas on how to go about this or look at Garry’s court case from 1981. Some want nothing to do with any legal name, i.e. the ALL CAPS NAME, strawman, fictitious person or token, others want to claim it, or re-venue it into a foreign/private/common law trust; some could live with dual ‘personhood’ and others are purists, only able to serve one master, whether that be self, god or the universe at large. Below is the approach of Jan: a people, sent off in March 2018 with almost no response until today, except from the German consulate, but apparently awaiting more feedback.

UN – Declaration on the Rights of Indigenous Peoples (note : the email explains why ‘indigenous’ is an inappropriate term should be avoided)

Not exactly fast forward to 2022, but another 4 years of observation, refining and learning, Jan: a people made his final approach, the last stand, the culmination of 10 years investigation into matrix matters. In his own words, piece of mind, truth at heart, served and couriered on various institutions on earth : 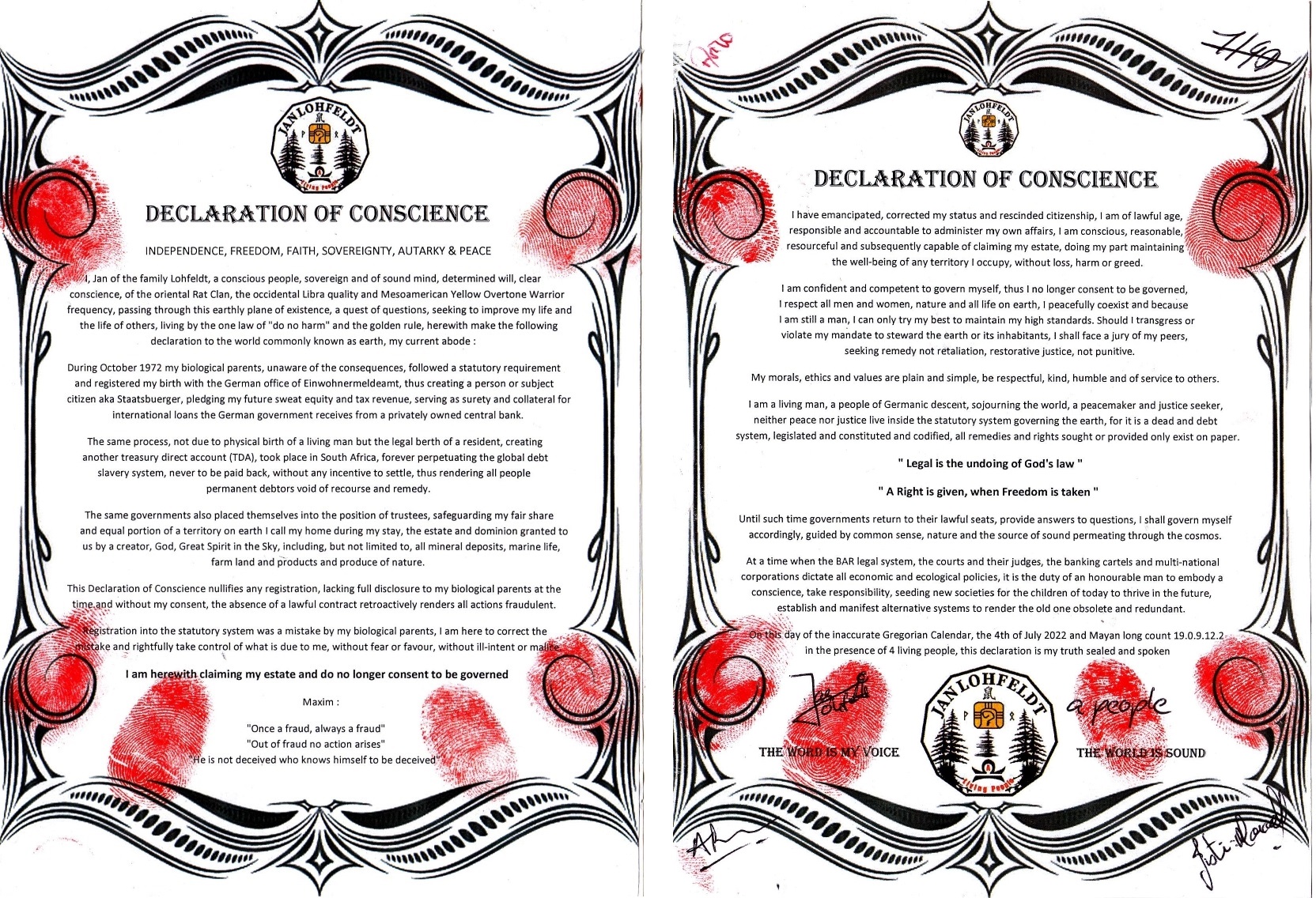 This declaration of conscience was accompanied by a letter of instruction and a set of previous documents, click here to view the complete document.

A question often received, especially from soon to be parents or those with young children, is how to avoid making the grave mistake of registering our progeny into the system of voluntary servitude, turning them into human collateral and trading their future revenue in exchange for fake FIAT currency issued by central banks to only just guarantee the minimum maintenance of a country and increasing its debt forever more so ?

Michael O’Bernicia has taken on this task, with an approach documented here :

Another man’s single-handed approach can be explored here, without revoking citizenship, but rather using the citizenship aka PERSON to perform its commercial duty, although now privately owned.